Testing UberX, Lyft and Sidecar Against a Cab in Six Cities 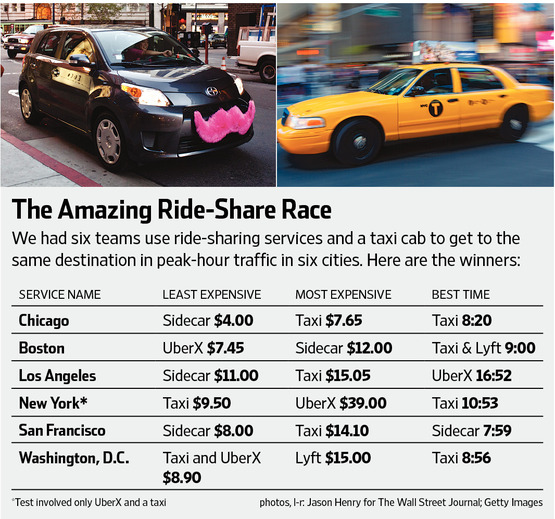 Sometimes, it’s OK to get in a stranger’s car.

Using apps, tens of thousands of people every day pay for rides in other people’s cars instead of taking cabs. Drivers from services called Uber, Lyft and Sidecar are taking part in one of the most unusual new kinds of businesses enabled by smartphones.

The first time I e-hailed a stranger for a ride in San Francisco a year and a half ago, it felt like the kind of thing I shouldn’t tell my mother. Who is this man with a Prius, I could hear her asking, and how do you know he isn’t a maniac? When I climbed in the car, he offered me a lollipop. Now I’m taking candy from strangers, too?

Let me explain, Mom: Riding with strangers, aka ride-sharing, has become a regular part of how I get around because it’s convenient and often cheaper than a cab.

There are still safety concerns regarding the drivers—not that they’re serial killers, but they might lack comprehensive insurance coverage. But you could argue that these services, which use smartphones and GPS data, are potentially even safer to use than regular cabs.

What’s certain is that all three services are spreading fast, available in many U.S. cities, from Chicago to Charlotte, N.C. UberX, the largest nonprofessional driver service run by Uber, is in 25 U.S. markets.

Like any form of transportation, you need to be smart about using these apps.